Non-equilibrium chemistry and cooling in the diffuse interstellar medium

A. J. Richings, J. Schaye and B. D. Oppenheimer

In the figures below we show the non-equilibrium cooling functions of gas that is cooling either isochorically or isobarically. The gas starts in chemical equilibrium at either 104 K or 106 K, then we use our model to follow its chemical evolution as it cools at constant density (isochoric) or at constant pressure (isobaric), recording the cooling rate as a function of temperature. We consider both solar and ten per cent solar metallicities, in the presence of the Black (1987) interstellar radiation field (ISRF) and the Haardt & Madau (2001) extragalactic UV background (UVB). We show results for two densities, nH, tot = 1 cm-3 and 100 cm-3. For the isobaric runs, this density is measured at 104 K.

In addition to the cooling functions (top left panel of each figure), we also show the abundances of H2 (top right panel), CII (bottom left panel) and electrons (bottom right). We compare the isochoric (blue curves) and isobaric(red curves) runs in non-equilibrium (light shades) with their corresponding cooling functions and abundances in chemical equilibrium (dark shades), as indicated in the legend. The figures at solar metallicity in the presence of the Haardt & Madau (2001) UVB correspond to figures 7 and 9 of paper I. 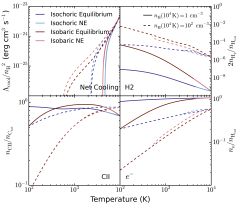 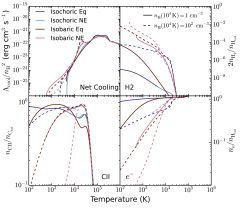 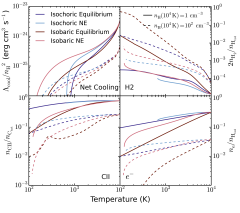 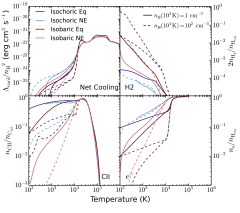 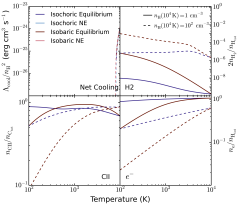 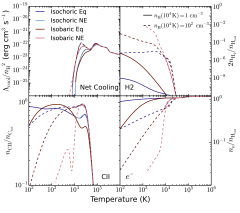 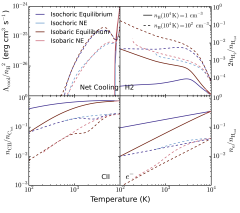 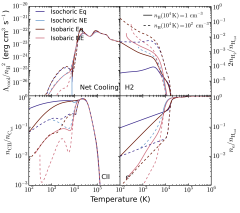 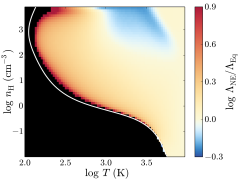 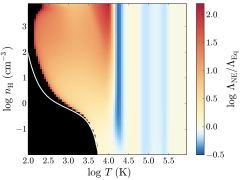 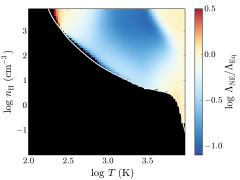